The Story of the Mill

In 1791 John Auchinleck advertised for "an architect, who perfectly understands the construction of flour mills to be wrought by water".

Ballydugan Mill was built in 1792. It was an engineering marvel. The latest technology and the best materials were employed to create a vibrant economic venture: eight vast floors producing flour, bran and starch, powered by water, wind and steam. The mill contained four pairs of stones, two of them French burrs. The whole property was valued at £62.00.

An imposing structure, six storeys high with two attics, the Mill is built of Silurian rubble masonry, roughcast, has a cut stone eves course, and is roofed in Bangor blue slates. The main block is 66ft by 48ft and 58ft high. Included in the structure is a walled forecourt which links the mill building with a row of stores 96ft in length pierced by an entrance gateway. As the water from Ballydugan lake was only sufficient for eight months in the year, the mill had a 25h.p. Steam engine.

The Mill provided wealth for its owners and jobs for the community. These were the all too brief glory days of Lecale's agricultural society prior to is demise along with other industry in the area. By 1857, less than 70 years later, the Ballydugan Mill, a deserted giant, lay desolate. For more than 125 years it was allowed to fall into ruin.

It took vision and commitment to restore the Mill to its former splendour. In 1987 the Mill was bought by Noel Killen, a local contractor renowned for his love of traditional Irish buildings. After many years of hard work, the restoration project was completed and the Old Mill was given a new lease of life. The charm and majesty of the building led to it finally being given the listed building status that it richly deserves.

It was always Noel's aim to open the mill to the public and allow others to appreciate the beauty and majesty of the building. As a result of years of work The Mill at Ballydugan now incorporates a ground floor Cafe (The wheelhouse) First floor restaurant (The Lecale Restaurant), and 22 en suite bedrooms now occupy the third, fourth and fifth floors, with unique, scalable, and adaptable function facilities catering large parties, wedding receptions and conferences. 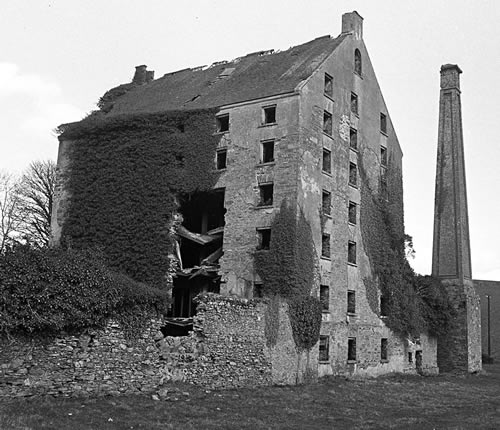 Gallery Images are creditied on the image
Banner images are from
Arthur Allison, You Them Us, Lyn Stansfield, Joanne Symington